Blog - Latest News
You are here: Home / News / From Past To Present

Native American tradition and innovation are presented side-by-side in a hotel’s art collection. 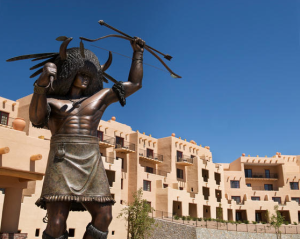 More than 300 pieces of Native American Art; 90 plus Native Artists; one location: Hilton Santa Fe Golf Resort & Spa at Buffalo Thunder in Santa Fe. Centered in the massive gallery-like Native inspired lobby, the $2 million collection is reflective of the artistry and inspiration found with the Po’suwae’ghe Owingeh traditions as well as the surrounding pueblos. Filled with displays of pottery, paintings, sculpture, mosaics, and weavings, every Pueblo and tribe within New Mexico is represented in the ever-changing exhibits.

The width and birth of this collection is a tribute to George Rivera, tribal governor of the Pueblo of Pojoaque. A renowned artist himself, Rivera received degrees from the Institute of American Indian Arts and the California Institute of Arts and Crafts. Thus, his first-hand experience as an educated craftsman enabled him to know which works and artists to include in the galleries. A key element has been to feature pieces that best tell the full story of pueblo art’s foundation and future. In addition, the exhibit is Native owned and the Pojoaque Pueblo manages the collection, having purchased the pieces directly from the artists.

Governor Rivera’s 12-foot bronze-cast sculpture “Buffalo Dancer” welcomes guests to Buffalo Thunder. “My statements are about cultural recognition and preservation,” says Rivera. “A lot of my themes are based on pueblo dances and traditions.” Accomplished in several mediums, the gallery also features several of Rivera’s paintings such as his colorful “Look Both Ways,” where a dancer in full dress stands in the center of a highway, the past behind him and the future before him.

Karl Duncan is the curator of the collections, and explains that the Buffalo Dance is a ceremony usually performed in the winter months to ensure the well-being of the community or pueblo during the harsh winter months. “The buffalo has power and strength,” says Duncan, “and by positioning Governor Rivera’s sculpture at the entrance to Buffalo Thunder, we are creating a healthy and strong community experience. The animal represents a kind of revitalization of the tribes and the Pueblo now has its own small herd of buffalo to roam, breed, and share the meat with their families.”

In this collection, tradition and innovation are presented side-by-side, and feature both traditional and contemporary voices, which speak multiple truths about the Native American experience in today’s society. One of the property’s featured artists is Rose “Bean” Simpson from the Santa Clara Pueblo who works in many different mediums. Art lovers, hotel guests and tourists can feast their eyes on her massive stained glass mural, “Dancer Descending a Staircase.” A strong voice in Native contemporary art, Simpson’s design is the descending figure of a corn maiden, moving and shifting through time and space.

Pueblo pottery is an important part of this exhibit and is featured in several glass cabinets throughout the lobby space. Potter Kathy Wall of the Pueblo of Jemez is descended from a long line of ceramic artists, receiving her formal training at the Institute of American Indian Arts in Santa Fe. Her pottery sculpture, “Evening Star,” a whimsical and colorful figure, was crafted with traditional clay found in New Mexico. Wall prepares her clay by mixing, soaking, wetting, and sifting; a process that takes several days.

“Working with material from Jemez makes me feel connected to my family, the people, and the land we call home,” says Wall.

This collection of native-owned Native-American art showcases the importance of art making and the visual arts in the culture and economy of the communities of Northern New Mexico, which are part of Santa Fe’s vibrant arts market — one of the largest in the United States. Duncan conducts private tours of the collection upon request.

Located several miles from downtown Santa Fe, this four-star resort also features a world-class spa specializing in treatments with native plants and stones indigenous to the area as well as the 27-hole Towa golf course which utilizes the area’s natural topography for challenging and visually beautiful play.